Warning: _() expects exactly 1 parameter, 2 given in /var/www/vhosts/escolania.cat/httpdocs/wp-content/themes/PDP/header.php on line 17

More audios
Lisent us every day at the Basilica of Montserrat at 12h, and 19h When do we sing?

The choirboys and the Escolania’s entire educational community hope that you find all the information in this virtual visit useful, and that it also serves as a prelude to a live audition with our choir.

The Escolania is a liturgical Choir that has been singing to the Virgin of Montserrat for more than 700 years. However, the Escolania has adapted with the times, and not only continues to sing at the Sanctuary but also holds frequent concerts throughout the country and abroad. Although the Choir is the core of our institution, the Escolania also has a School that is at the service of the boys who belong to the Choir, as well as a Residence where the boys can learn life values and receive help in times of need.

Should you need more information, please do not hesitate to contact us. You are welcome to do so for anything you might need.

May the singing of the choirboys bring you the peace and beauty of God. Thank you very much!

In this space you will find general information about our musical activity, and also the most essential parts of each of the three areas that make up the Choir: the Choir, the School and the Residence. If you need any more information, please feel free to contact us. You are welcome to get in contact for anything you may need.

May the singing of the choirboys convey to you the Peace and Beauty of God. Thank you very much!

Currently, the Escolania is comprised of 52 boys ages 9 to 14 from all over Catalonia. Most of the choirboys start in the 4th year of primary school (although some start in the 5th year), and finish in the 1st or 2nd year of secondary school depending on their voice.

The Escolania is an integrated centre for general and artistic education, recognised by the Ministry of Education of the Catalan Government. In the morning, the choirboys receive general education on all the core subjects. They then spend the afternoon focused on music (studying music theory, holding choir rehearsals, practicing both instruments, taking orchestra lessons, etc.)

Since its inception, centuries ago, the choirboys and their singing have rendered service to the Sanctuary of Montserrat, which is visited by people from all over the world who come to hear them every day. Moreover, at Montserrat they receive a comprehensive education that enables positive growth at this critical age

To ensure that all activities can be carried out, the Escolania relies on the invaluable dedication of a whole team of teachers, educators and office staff who work in the administration and services fields.

If you do not have a PayPal account, you can register easily and free of charge here.

Make a donation through PayPal:

How to get here:
Montserrat is accessible by car with paid parking spaces available near the basilica. Parking is free at the base of the mountain, next to the Cremallera.

Public transport:
At every station of the FGC (Catalonia’s Public Transit), you are able to buy tickets that will allow you to combine the train ticket with the Cremallera train to Montserrat. More information and train schedules for the Cremallera can be found at www.cremallerademontserrat.cat

The Parents’ Association of the Escolania plays a very active role in the school, organising activities for the families and serving as the taskforce behind a number of programs:

THE ESCOLANIA’S MAGAZINE
This magazine will give you an idea of what past school years were like.

This magazine will give you an idea of what past school years were like. 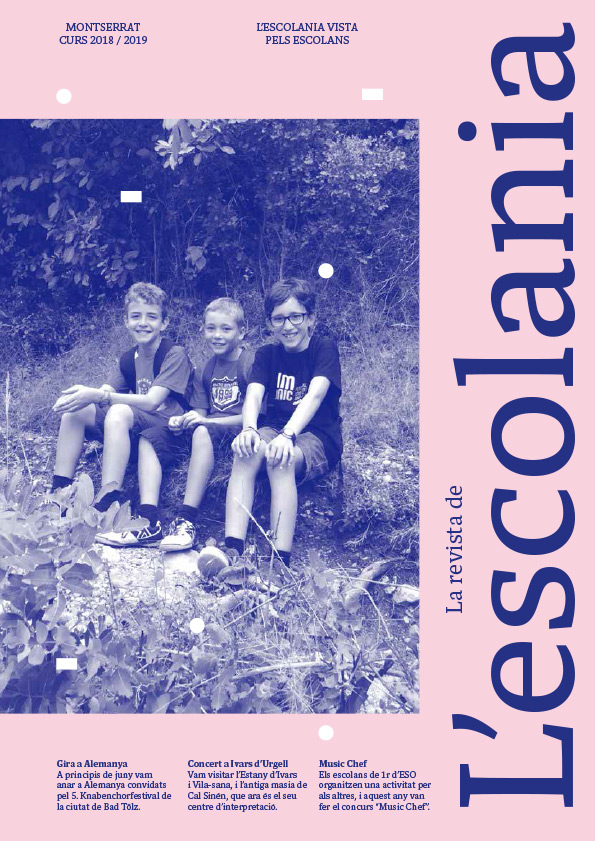 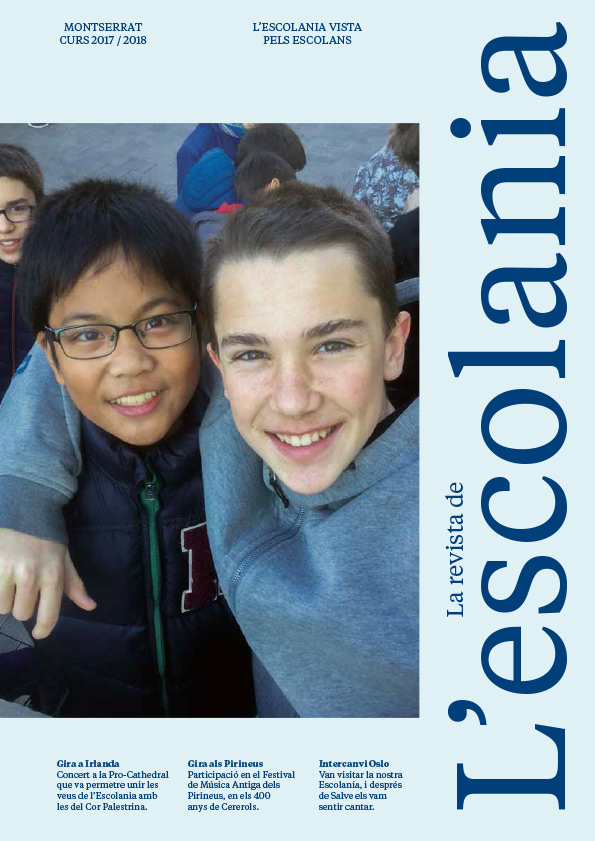 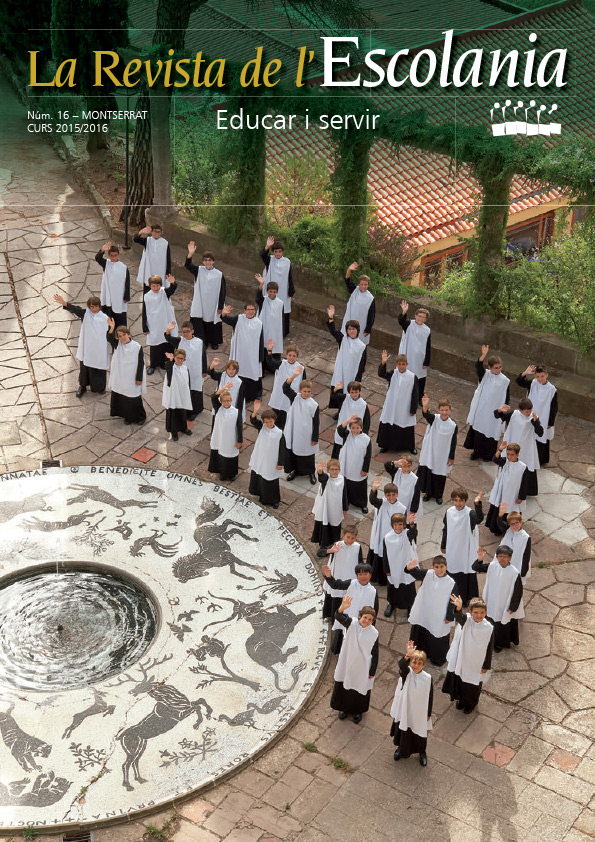 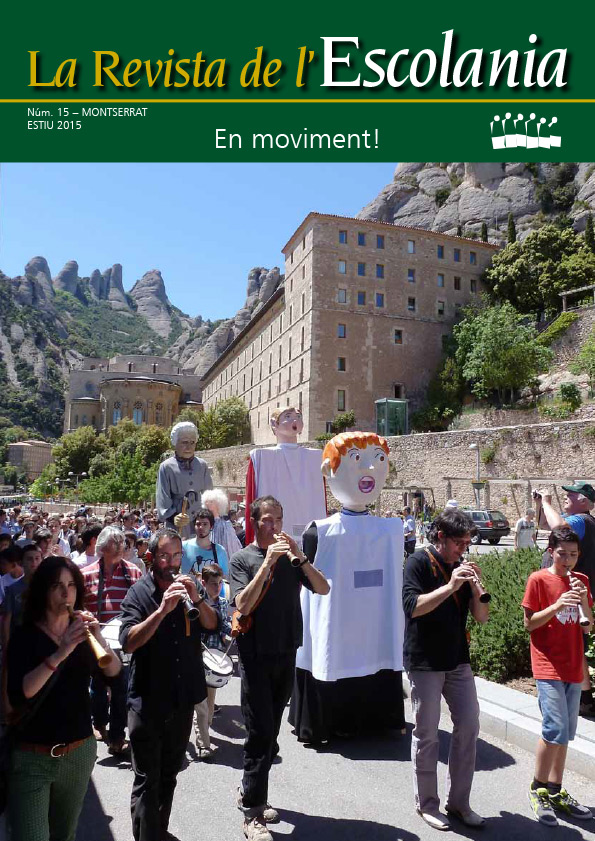 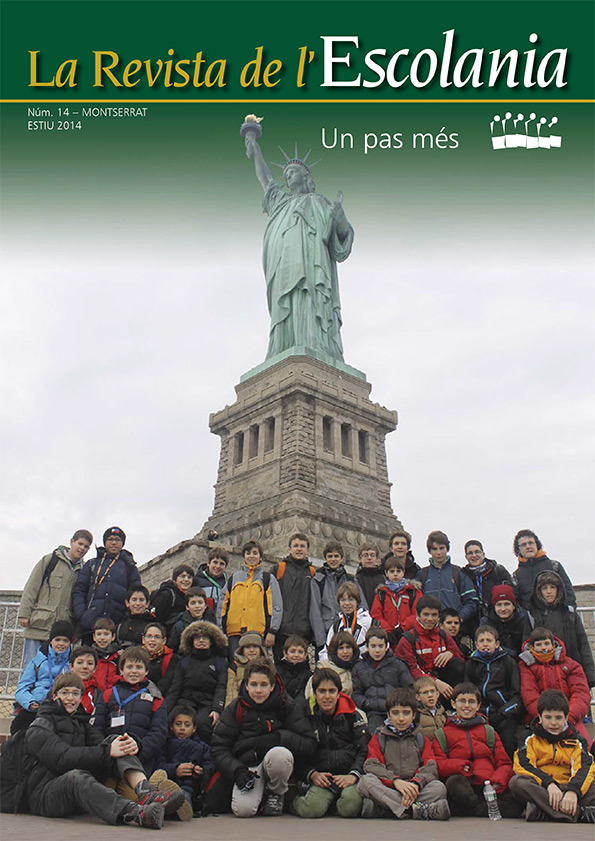 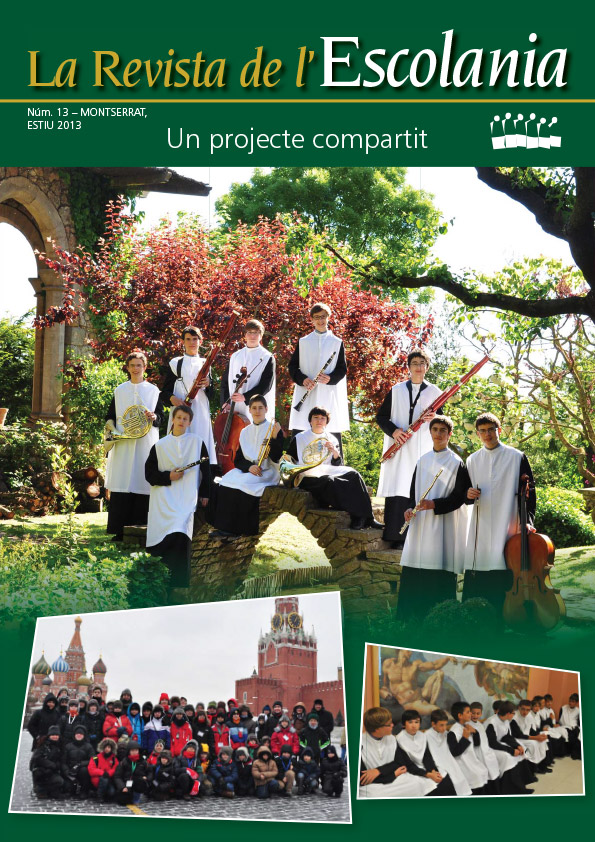 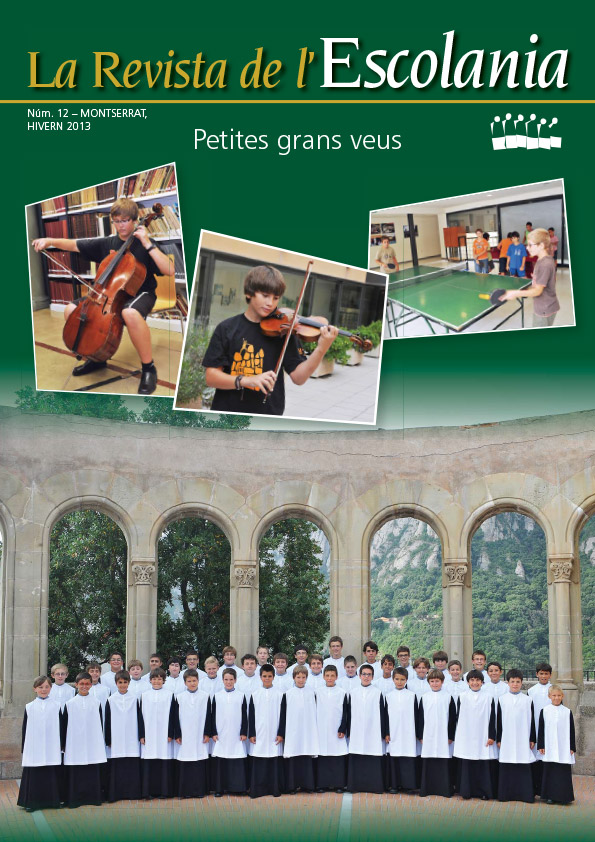 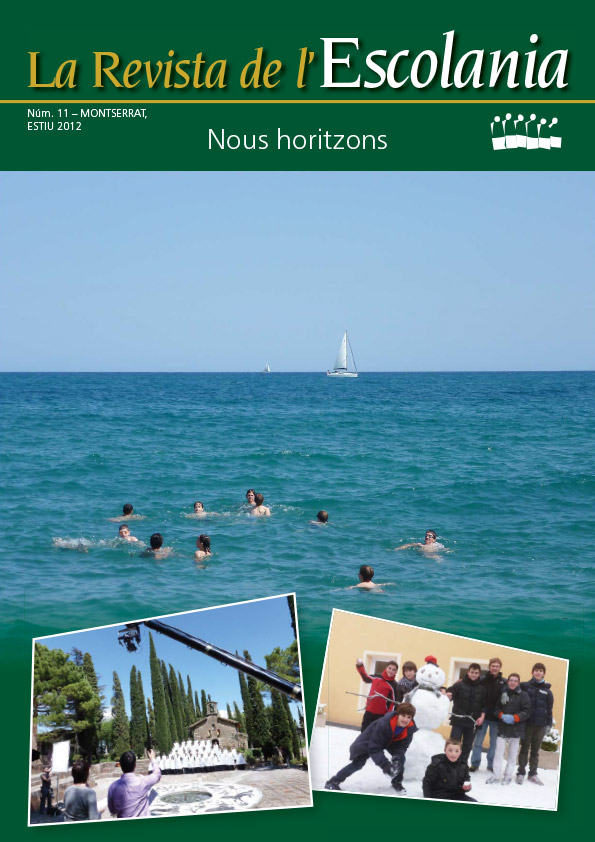 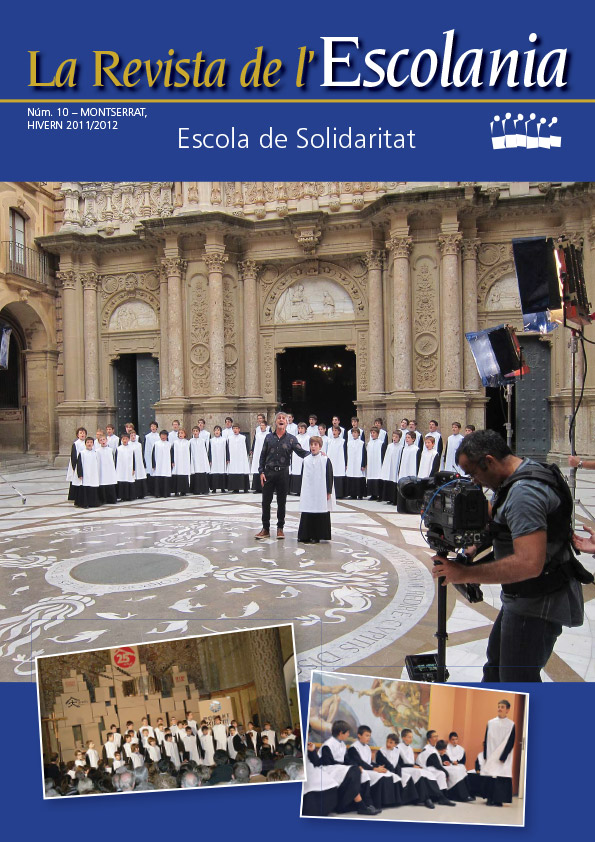 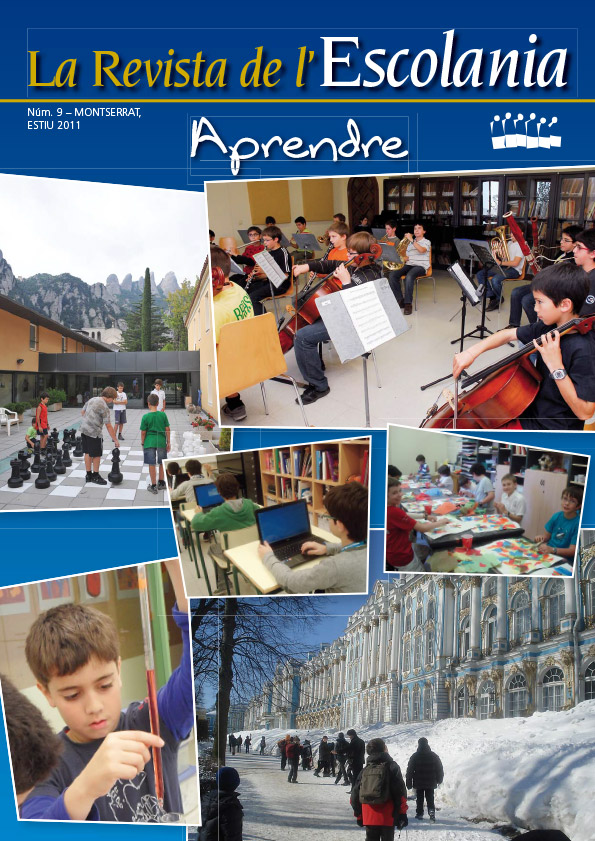 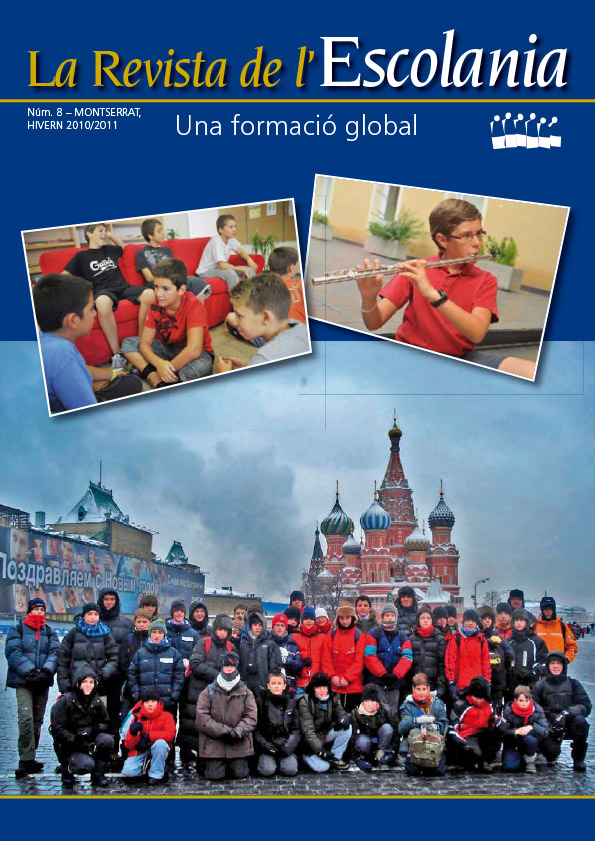 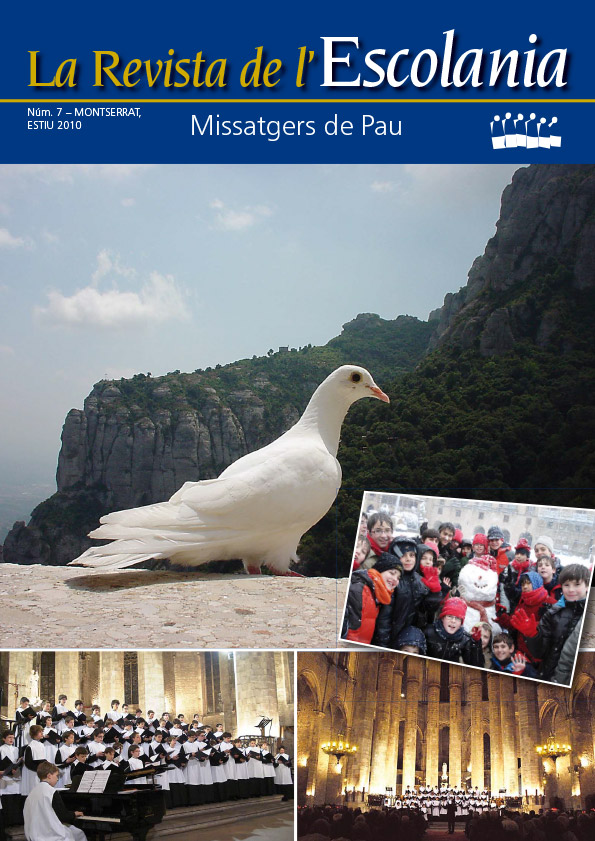 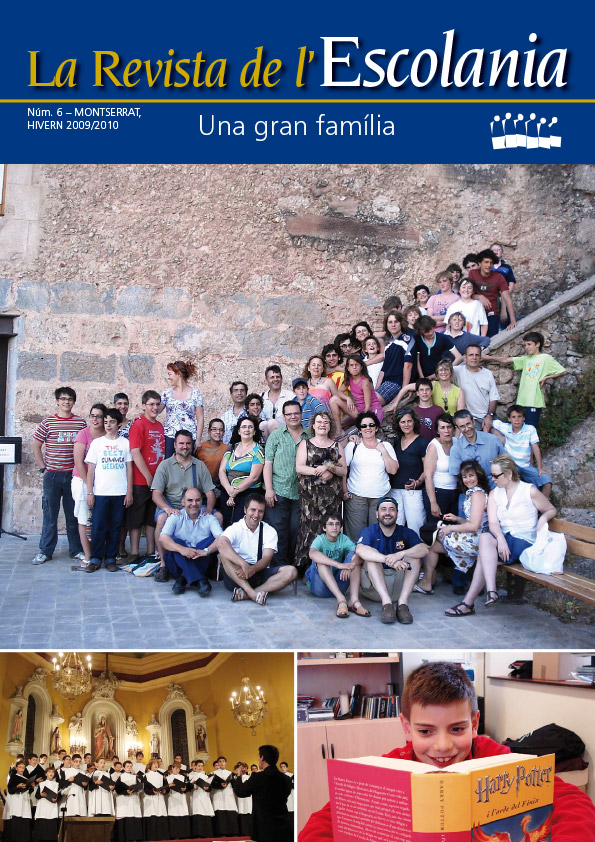 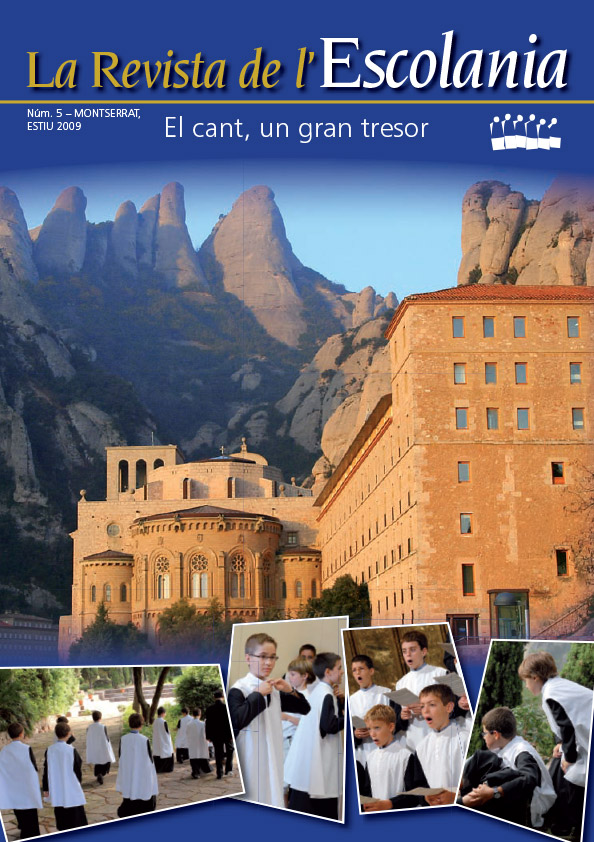 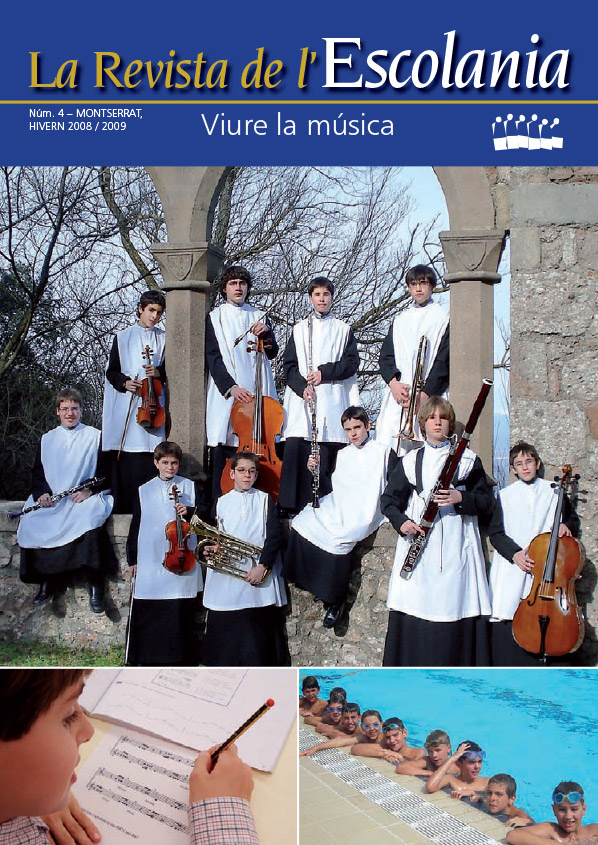 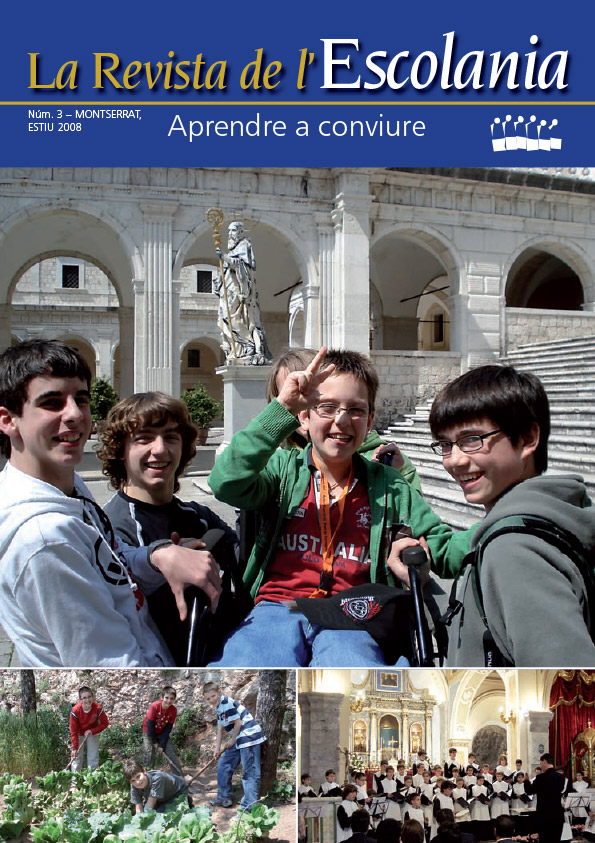 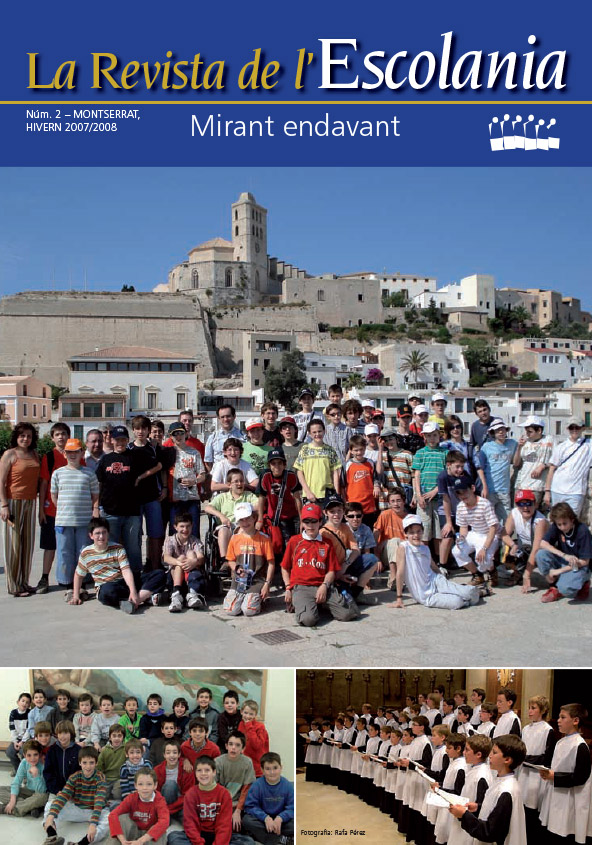 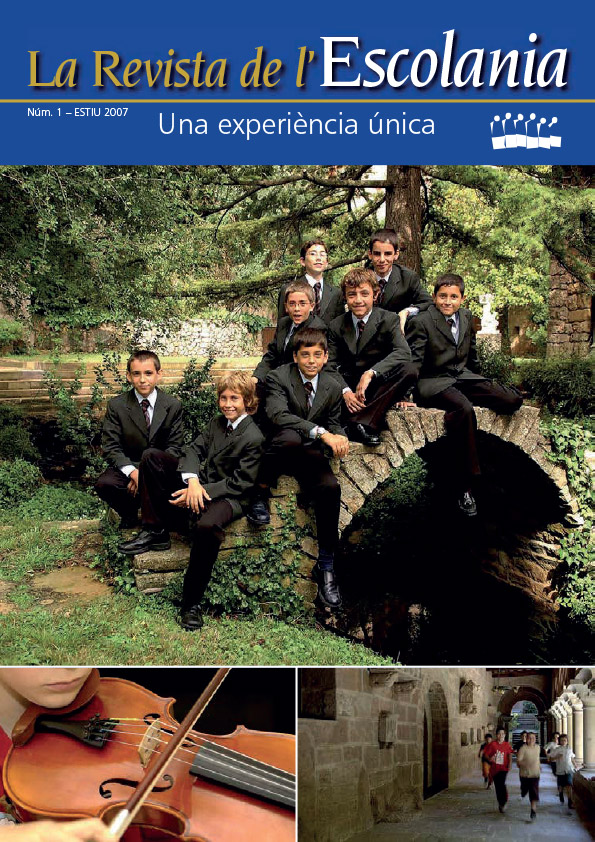 How can one apply for the Escolania?
You will find the answer, here.

What is a day in the life of a choirboy like?
The choirboys begin classes at 9:15, which allows them to arrive to Montserrat on the first rack railway of the day. Monday through Friday, at 13:00, they sing the Salve, after which they have lunch and some playtime. In the afternoon, classes begin again at 14:30, and at 16:00 they have an afternoon snack. After more classes and rehearsals, they sing again at 19:15. After that they can either go home to sleep or stay at the Residence for dinner and have some leisure time before bedtime. The 4th graders finish their school-day at 17:45.

What do they study?
Montserrat’s choirboys study the same subjects as other boys their age, but they are also exposed to a lot of music: they play two instruments (the piano and another orchestra instrument of choice), study music theory, choir singing, orchestra…

You can see different areas of the Escolania in the Open Day video, here.

How long do they stay in the school?
Most students arrive in the 4th year of primary school, with a few arriving in the 5th year. Their stay ends in the 1st or 2nd year of secondary school, depending on the evolution of their voice.

The schedule above applies to Monday through Thursday. On Friday, all choirboys go home at 17:30 and stay with their families until Sunday morning at 10:00. Sunday is a special day. They sing at 11:00 (for Conventual Mass) and at 18.45 (for Vespers). The time in between is spent with their families, most of whom stay in Montserrat during this time (although those who live close by may go home for lunch). Activities are also sometimes organised between these hours. It should be noted that not all choirboys come on Sundays to Montserrat, instead, shifts are planned to ensure that everyone can have a few Sundays off, apart from the ones that fall on holidays (two weeks for Christmas, the week after Easter, and approximately eight weeks in the summertime).

What are the choirboys like?
They are completely normal children: they play, laugh, cry, get excited, get angry, some are more active, others calmer, some are more mischievous, others not so much… It is true that at the Escolania there are some characteristics that are perhaps not as common among other children their age: an interest in classical music, a proclivity in many toward reading, the courage to perform publicly in front of large crowds, the way they talk to the media… But there is one thing that makes them truly exceptional: when they sing, they touch people’s hearts, and people from all over the world are deeply moved when they hear their song.

What do they eat?
The choirboys enjoy a balanced diet, following the guide-lines set by a nutritionist. Home style meals are prepared by a team of cooks. Throughout their stay, the choirboys are encouraged to eat a variety of foods.

Where do they come from?
The Escolania choirboys come from all over Catalonia. On occasion, there have also been a few from other Catalan Countries.

Who pays for the Escolania?
Choirboys’ parents pay 20% of their child’s stay at Montserrat. The Department of Education of the Catalan Government finances part of the schooling. Support from benefactors comes through the “Fundació Abadia de Montserrat 2025.” The rest of the expenses, which constitute the largest remaining portion, are covered by the Abbey of Montserrat. However, no child will leave the Escolania for financial reasons: all that matters is that they have a good voice and musical skills.

Perks for families
Every Sunday, families are provided with a parking space, a place to eat, and various discounts at the Sanctuary. But the most significant benefit that families enjoy at Montserrat is the community with other parents and children, as well as with the greater Montserrat community.

Singing at the Escolania is a unique experience, and not only on a musical level. At the Escolania students receive a comprehensive education in a nurturing environment offering a great number of opportunities.

The Escolania consists of children between 4th grade of primary school and 2nd grade of secondary school. Admission normally takes place in 4th grade of primary school, but it is also possible to join during the 5th grade if there is an opening in that class. However, if you are planning on attending, it is best to contact us as soon as possible (you can start the process as early as 1st grade). We can arrange an on-site visit, no commitment required.

For those considering applying, the final selection process does not take place until 3rd grade of primary school. However, it’s a good idea to have started a preparatory and mutual acquaintance phase beforehand. Nevertheless, any time is a good time to start the process.

Joining the Escolania must benefit all parties involved: the boy, the family, and the Escolania. In order to join the Escolania the boy must have an aptitude for music and a good voice, but it is equally important that the family understands our educational philosophy and sees it as something beneficial for their child. In order to achieve this and so all can get mutually acquainted; numerous visits and final tests are established.

While at the Escolania, the student will learn a lot about music, but he will also receive a high-quality general and moral education. Class sizes will be small, and he will learn as much within the classroom as outside by living alongside others, as well as through participating in many events and visiting other places while singing with the choir.

If you want to receive more information or would like to pay us a visit, please don’t hesitate to contact us.

Next concerts outside of Montserrat

When we sing in Montserrat